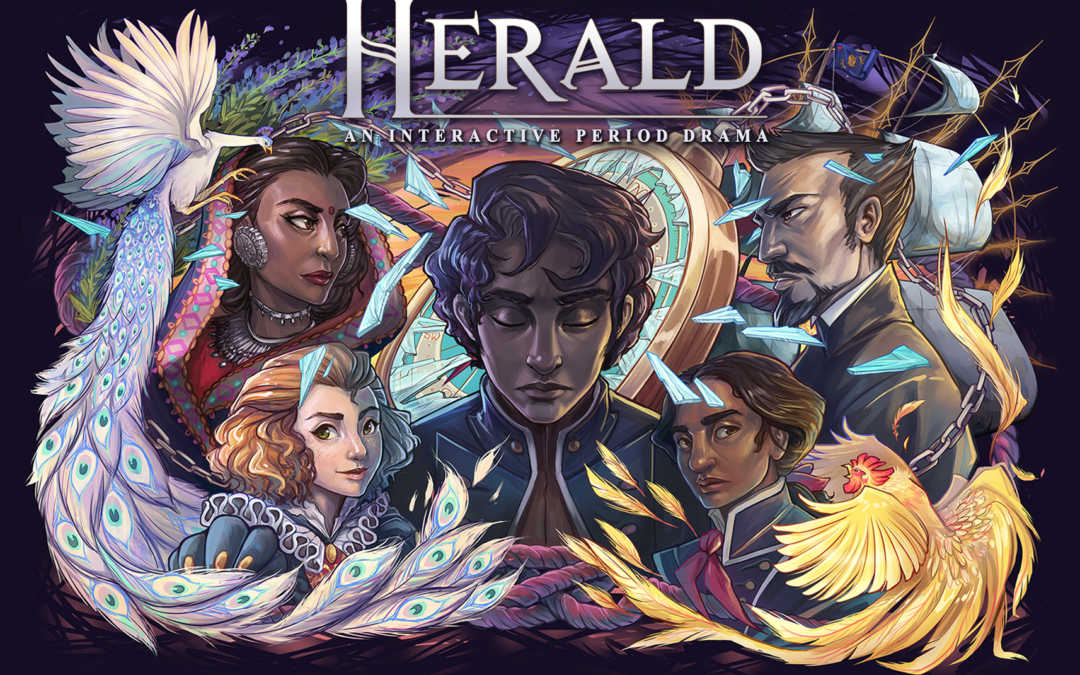 Wispfire released Books I & II of their first game, Herald: An Interactive Period Drama, on PC, Mac, and Linux.

Wispfire consists of four founding members that studied at the Utrecht University of the Arts and have a background in theater. They all wanted to make a game that delivers a theatrical experience to the player. After 3 years of development, the first two books of Herald: An Interactive Period Drama are now released.

Roy van der Schilden is Lead Writer & Business Director at Wispfire. In an interview with Dutch Game Garden, Roy tells us about the studio background, how they came up with the setting for the game, and their vision. Read the interview below.

What kind of game is Herald?

“Herald is an interactive costume drama game that takes place in an alternate history setting in the 19th century. You play as the character Devan Rensburg, who is of mixed race and a steward on board of the ship The Herald, sailing towards Devan’s country of birth: The Eastern Colonies. The gameplay is a mixture of the classic point-and-click adventure games, the modern Telltale games, and visual novel games from Japan. As Devan, you experience firsthand the differences in power and the hierarchy that existed as a result of colonization.”

Why is the game being published in multiple parts?

“The story we wanted to tell is too big to fit in one game, so we’re making it in several parts. Book 1 & 2 are one game and Book 3 & 4 will be available as downloadable content. In the first two books, there will be more than 50 choices linked to important choices that we track. All these choices transfer over to the next books which will contain even more. It will take several playthroughs to see every change you can make to the story. Every chapter will have multiple endings and all those endings lead up to the outcome of the final chapter.”

How did you determine the style for the game?

“Emotions are a very important aspect of communication and reading them offers many ways for small subtleties to come across. Games made with a small budget usually don’t have complex facial expressions to help tell the story, but the Japanese visual novel games often do it pretty well by using portraits during their gameplay to express a wide range of emotions on characters. Herald uses 3D environments to show the scene and 2D animated portraits to display the emotions the characters are having. We use a certain kind of software called Live2D to bring the 2D art to life. This software is mostly used by Japanese game studios and can be quite hard to master. The results you can get with it are beautiful though. Combining the 3D environment with the lively 2D art results in a unique visual style that is very pleasing for the eye.”

How did you come up with the theme for Herald?

“We wanted to make a story with characters that have strong personal bonds with each other. When we started thinking about making a game, we weren’t sure which direction the story would go. Eventually we settled on a story that is set in the 19th century, because it’s a period that resembles the current times. Many things are changing in our world, and there are some big divides between people. There are groups of people embracing these changes, and there are conservatives who want things to stay as they were. Herald is mainly about the different social classes that make up societies and how we, in Europe, dealt with those classes back in the 19th century. The age of colonization can be seen as an origin story for our current society. We started colonizing other countries across the world and we thought we were doing good, it took some time to realize that we were wrong. Some people couldn’t accept this, throughout Herald’s story you will see that as well.” How did you get prominent YouTuber Jim Sterling as a voice actor?

“We wanted a diverse game with lots of different characters, all those characters need to have unique voices too. A casting call was launched on Tumblr and other social media. Jim Sterling stumbled upon it and contacted us, he never voiced an entire character before and was eager to try it out. Such a spontaneous offer from someone like Jim is great and I hope he’ll be playing the game for his audience. There was a big response on the casting call from other people too. Getting the voice acting work done efficiently and streamlined wasn’t always easy. Written dialogue didn’t always sound good when it was spoken aloud, we had to slightly rewrite certain scenes because of that.”

How do you hope players respond to your game?

“I hope players will appreciate the story, since I believe it’s quite different from other games out there. There are many recognizable issues the story addresses. Not everything is very serious though, there are some more light hearted parts too. We also added a lot of references to real world history and there are a lot of things hidden in the game that you will only discover by digging deep.”

What are you going to do after Herald?

“We want to keep making games that have a story to them. If we manage to make a profit out of Herald, then we’re going to keep making similar games. Personally, I will always be inspired by history for new settings in games, I find history to be a great inspiration for new stories.”

Herald: An Interactive Period Drama is out now for PC, Mac and Linux on Steam or DRM free on GoG and the Humble Store.