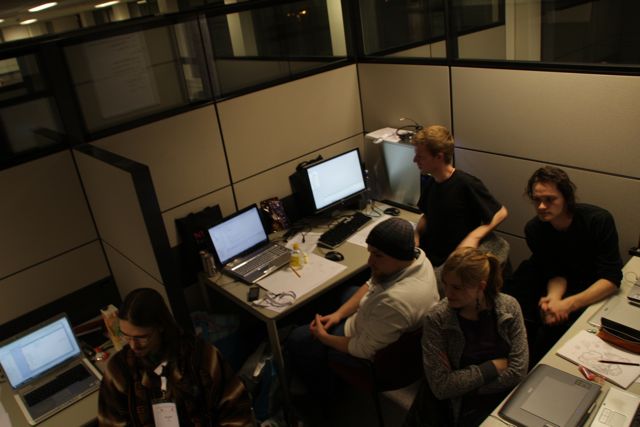 The Global Game Jam is an international event where people from all over the world make games within 48 hours. Programmers, designers, artists, animators, composers, and producers join the event in teams. The jam is all about experimenting, practicing skills, and getting to know new people. This year, the event took place on January 20-22nd, with game developers building games around the theme ‘Waves’.

For pictures of the GGJ, check the Flickr album.

What games were made?

Jirre Verkerk from Wispfire joined the location at Saxion Enschede, and made the game Emitir, a tower-defense rogue-like game with pixel art graphics. “We participated in the Global Game Jam to join the world in making something unique within 48 hours,” he says. “It’s a good reason to lose a weekend of sleep over it!”.

Virtual Play participated with their entire team in the comfort of their own office. They made the game We’re Still Here, an experimental building game where a group of people live on a deserted island. They are left at the mercy of the wave goddess Tiamatzu as they try to escape the island.

At the NHTV Breda location, Matthijs van de Laar and his team from Twirlbound were participating as well. Their game Crest won the audience award. In Crest, you play as two creatures who are on a quest inside the subconsciousness of a dying man to relive his favorite memories.

For an overview of all games made during the weekend, check the official website.

Play the games at the Demo Night!